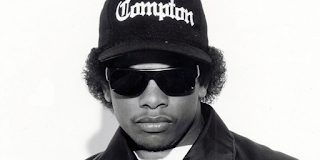 Easy E's daughter Erin Wright doesn't hate Straight Outta Compton. In fact she would encourage you
to see it and says that Jason Mitchell, who portrayed her late dad, did a excelled job!!

But she does think the film left out some important parts of her father's legacy. She also questions the scene in which Suge Knight beat up E, and says that it was actually her dad that puled a gun on
the Death Row boss.
Posted by DJ NEW ERA at 8/18/2015 06:33:00 AM