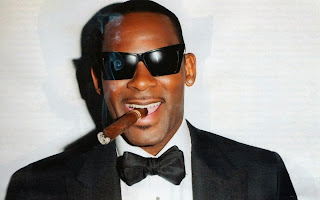 R. Kelly probably felt he would be spending this time focusing on publicizing his latest album Black Panties, but thanks to a scathing article published in The Village Voice, the R&B star’s past has become the central story in the media. In the article, former Chicago Sun-Times journalist Jim DeRogatis recounted tales and reports he says proves Kelly had engaged in numerous sex acts with underaged girls.
R. Kelly was asked about The Village Voice piece during an interview with Atlanta’s V-103 radio station. Speaking with host Big Tigger, Kells makes an analogy between his life at the moment and the game of football, thanks his fans, and offers a message to his detractors.

Well, I feel like I got the football, man. I’m running towards the touchdown. Stopping and looking back, mess around and get tackled. And I also want my fans and everybody out there to know that I really appreciate  everybody’s support from the very beginning of my career. But as you know, when you get on top of anything, it’s very windy up there. It’s not just about getting on top, it’s about holding your balance once you get up there. You have to be spiritually a climber. So I feel good about Black Panties… As long as I got my fans screaming my name around the world and buying my records, and supporting R. Kelly, everybody that doesn’t agree with it should listen to the last song on Black Panties.

The final track on Kelly’s Black Panties is “Shut Up.” The song opens with the lines, “This songs goes out to all the people out there that be running they mouth/ And they don’t know what the hell they saying/Shut up.”