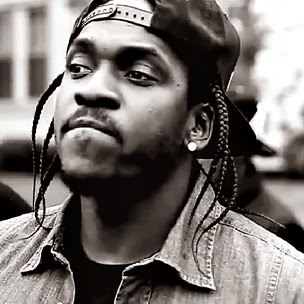 According to Virginia rapper Pusha T, all the makings for a Clipse reunion were in place over the past year, but he says his brother No Malice wasn’t quite up for a reunion. While speaking with Zane Lowe of BBC Radio 1, Pusha revealed that in addition to almost reuniting on stage at this year’s Coachella arts and music festival, the Virginia Beach duo were extremely close to taking part in a Lord Willin’ 10 year anniversary tour last year.
On top of a possible Coachella reunion and the Lord Willin’ anniversary tour, Pusha says both Kanye West and producer Pharrell Williams were fully onboard for a new Clipse album. Despite the varying opportunities, the My Name Is My Name rapper says it just wasn’t the right time for his brother.

“Man, I would really love to,” said Pusha T when asked about reuniting with No Malice. “My brother is really on his mission right now…We had the 10th anniversary, 2012 of Lord Willin’. 30 dates, needless to say high dollar number. High dollar, already done. Two weeks before it’s time to go my brother was like ‘Nah, I don’t want to do it…I’m off that. I’m on my mission right now.’ It’s about Hear Ye Him. It’s about where he is spiritually. And he was like ‘Nah, I’m not gonna do it. Just go ‘head’…On top of those scenarios I just gave you, you got Pharrell saying ‘Hey, when y’all ready let’s go. And I think we should just do a two-sided—tell two stories.’ He was like ‘You do what you do, he do what he do, and that’s what we do.’ Kanye is like ‘Listen, I want to executive produce this and if you just want Pharrell to do the whole thing that’s fine. If not, I’ll just be here too.’ And he’s like ‘Not right now.’”

Prior to speaking on the possibilities of a Clipse reunion, Pusha commented on the making of My Name Is My Name and the importance of keeping one particular topic outside of the studio when he was crafting his solo debut. According to the G.O.O.D. Music wordsmith, speaking on what’s radio-friendly wasn’t allowed in the studio since it served as a hindrance in creating the “purest of music.”

“We let everyone come in and hear what we’re doing and when people start talking radio and things like that, the session would be ended or you’d have to get out, but the mood was still ruined,” said the rapper. “It just wasn’t allowed, man. We were only making the purest of music. And we made Yeezus side by side, Yeezus and My Name Is My Name. He did what he wanted to do and I did what I wanted to do. I couldn’t have asked for a better person to executive produce this album. Like the space that he was in.”

Pusha also spoke on turning down a number of features recently due to the fact that he has to connect with a record “100 percent” before he can contribute to it.

“I have to have a connection to the record, 100 percent,” he said. “Like I feel like at this point and it’s so bad, man because I’m turning down features all the time…If I’m not connected to the record, man—this isn’t a time in my career that I feel like I should be doing anything other than.”

Pusha T’s interview with Zane Lowe comes almost two months after the rapper released his debut solo album, My Name Is My Name. Released on October 7, My Name Is My Name follows the release of Clipse’s debut album by over a decade. Pusha T attributed the delay surrounding the release of his first ever solo album on waiting for fans to become comfortable with him as a solo act.

“It’s been a long time coming but I only say that because people feel like it’s been a long time coming,” said Pusha during an interview with Complex. “I think it was required. I had to make sure that all the bases were covered. I started out with mixed reviews, with me doing solo freestyles. So I felt like it took this long for me to get people comfortable with Pusha T the solo artist.”
Posted by DJ NEW ERA at 12/03/2013 07:18:00 AM