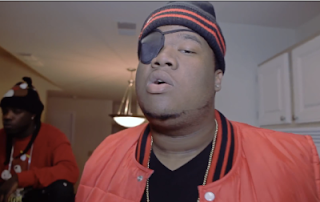 Doe B, a native of Montgomery, Alabama, was shot in the eye approximately three years ago and saw his career burgeon as he found a new dedication to his craft. After working with local talents, he then got the attention of T.I. who signed the young rapper for his credibility as well as his way with words.
Early reports suggest that he was performing in a club in his hometown when he was shot. Apparently another woman, 21-year-old Kim Johnson, was killed as well.
Doe B also performed earlier this year at a celebration for AllHipHop’s 15th Anniversary.
We send our condolences to his family and friends.
The hip-hop community is mourning the loss of one of its rising stars. Hustle Gang rapper Doe B was shot and killed in Alabama on Saturday.
The Montgomery, Alabama native, born Glenn Thomas, was reportedly killed in a fatal shooting that occurred at Centennial Hill Bar and Grill (formerly Rose Supper Club) in his hometown in the early hours of December 28, according to various tweets.
His Hustle Gang boss T.I. shared the sad news on Instagram. “RIP to my lil brother Doe B,” wrote Tip. “We gon miss u my nigga. U’ll never be forgotten & U WILL NOT DIE IN VAIN. We Love U champ. Always. Just rest now my nigga….WE GOT IT From here.”
A rep from Doe B’s management confirmed his death, tweeting, “On behalf of doe b’s management i would like to thank all of his fans and say Rest in Peace my brother Glenn thomas aka @CBMDOEB.”
His manager, DJ Frank White, vowed to put an end to the senseless violence. “I will do everything i can to see the rose never open. How many people gotta be fuckin killed. ??? Yall let guns in the club??” he wrote.
His peers including Drake, Soulja Boy, Trae Tha Truth, Machine Gun Kelly, and Meek Mill took to social media to express their sympathy.
“RIP Doe B,” tweeted Drake, while MGK added, “Damn. RIP Doe B. this rap shits crazy right now. Condolences to his family. Clubs keep lettin guns in the club as if that’s not where we as artists work. We got families to go home to, fuck is wrong with y’all.”
The rapper, who was previously shot in the eye three years ago, was building buzz following the release of his latest mixtape Baby Je$us over the summer. (Rap-Up)