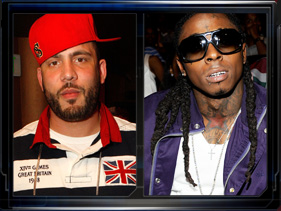 The last entry in Lil Wayne's heralded Dedication series came out in 2008. Four years later, the long-awaited Dedication 4 is now a reality.
On Sunday (July 22), Lil Wayne confirmed the release of the DJ Drama-hosted project to his fans on Twitter:

In addition, DJ Drama confirmed the project by retweeting Wayne's message, as well as discussing it with MTV's RapFix Live. "Me [and] Cortez [Bryant] had been talkin' back [and] forth for ...[a]bout a year that it was almost time for D4" said the mixtape deejay. "He said Tunechi had been mentioning it and was gearing up. During the Vegas stop on 'Club Paradise' tour, Tez told me it was a 100% go."