Mike WiLL Made It Explains Convincing Young Jeezy Of A "TM103" Track, Working With Gucci Mane As A Teenager 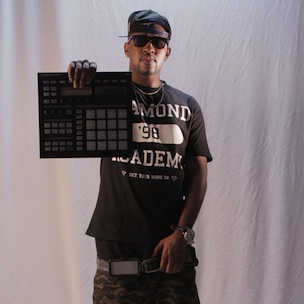 “Mike WiLL made it.” You have probably heard that phrase thrown out a lot recently before some of the biggest songs of the year such as “2Pac Back” by Meek Mill and Rick Ross, “Itchin” by Future and a whole slew of Gucci Mane mixtape tracks.

The Atlanta native that has been making beats for almost 10 years now. However, that almost never happened. Mike started out playing hoops and aspired to be a basketball player until one day he realized his skill for listening to beats on the radio and being able to play them by ear. With 50 Cent's upcoming single under his discography, as well as an inclusion on this month's TM103 album by Young Jeezy, that impulsive teenage decision has changed the sound of popular Rap music ever since.

The Genesis: "At age 14 I would always play stuff off the radio and I would play it back on any keyboard. One day my homeboy was like 'Yo, you should start making beats.' I looked into it further and went to the local Marz Music and was messing around with the [Akai] MPC [drum machine]. I re-made the 'Holla Back' beat by Fabolous and people were like, 'How long have you been making beats?' I said I don’t even know how to make beats. They thought I was lying [Laughs]. That day I went home and said to my pops that I just want to start makin' beats. He then bought me my first beat machine which was a Korg ES-1. With that I taught myself bars and how to count them and then I grabbed a little Casio keyboard and hooked it up to the machine and from there I never looked back."

Meeting Gucci Mane: "Me and Gucci met at Patchwerk studios. The relationship was organic from the day we met. We mess with each other real tough. He was the first guy to really put his stamp on me on the mixtape side. We did like 20 songs in three days the first tine in the lab back in '07. That’s the first time everyone heard 'Mike Will made it,' from the classic quote 'Mike Will made-it / Gucci Mane slayed it.'"

Record At Home Or Studio?: "We record the beats in the crib but its like a double-edge sword. When you get in those big studios you can hear the beat knock louder, and you can really feel every sound. However, I feel that recording tracks in the crib is better because you can hear a melody in your head and just roll out of bed and start working. You can also start on the track, leave and come back to it."

On Mimicking The “Trap Sound”: "I wouldn’t say that producers are trying to mimic Lex Luger and I because that southern trap sound really came from cats like Shawty Redd, Juicy J, DJ Paul and others. I didn’t want to try and outshine a master by giving the credits to me and Lex. DJ Paul and Juicy J created the whole dark, crazy sound then Shawty Redd just took it a whole ‘nother way. Those beats were the definition of the southern, club, street music to me. Lex and I are just the new cats that have brought a new wave of shit with the big homies influence. It’s only right cause that’s the shit I grew up listening to. Me being down here in Atlanta, that’s what we heard. From Three 6 Mafia, to Project Pat to Gucci to [Young] Jeezy's Trap or Die shit. There’s an era of a whle bunch of producers that paved the way before me."

Signature Sounds: "To me, if it works it works. My outlook on it though is that I don’t want to put myself in a box. People come to me like, 'I want that shit that you did for such n such.' Before I get to the stuff they are used too, I show them the stuff I think they should get on. Then they say something like, 'Oh, you on to something.' Then it may go into another whole direction and its been working. I mean listening to pioneers like Timbaland, [Dr.] Dre and Pharrell, they all brought their signature sounds for each genre and it worked. For me, I want every song coming out sounding different with different moods and feelings. Rap-Pop? I feel like a producer should not strain themselves to do that. However, if its organic then you should do it. With me, I look at it like the sky is the limit. Me and my team shoot for the stars. We listen to Top 10 [songs] on Billboard and everything. By doing that I challenge myself to try something that I never tried before and bring my sound with it and see how it comes out. It is important to change your sound, but don’t strain yourself."

A Vision: "When I was 16 or 17 years old first coming around Gucci, I wasn’t trying to tell him what to do. I was just a beat-maker, not a producer. Real producers usually have an outline or sketch on how they want the record to sound and let the artist paint that picture. You can not just be locked in on making beats thinking that is production. It is just 1/4th of the battle. Then you got to get it to the right artist. After you get it to the right artist you need to outline the picture for the artist and make sure he gets it and can execute the project the right way. Sometimes the song needs a feature and sometimes it doesn’t. I will tell artists like no you really need to do a track all the way solo. It all starts with a vision, a producer needs to know all of those key points. There is more to just making a record and then sending it to an artist and have him pick one."

Working On Young Jeezy's TM103: "When I brought the beat to Jeezy, he said it sounded crazy. A few months later they called me back saying we almost got this TM103 together but we just need one more record. They felt like I could execute that. I guess they thought I would come through in the clutch [Laugh]. I pulled up to the studio and we go in and they say they are looking for a club record. I then start to play some stupid ignorant shit that’s gonna shake the club because they said a club banger. Then I told him, 'Like man you don’t remember that one joint I brought you a couple months back?' He then said, 'play it.' I said '[I] bet this is what you need homey, this that epic shit.' He heard it and said all he needed was two blunts n' a ride. He knocked out the record by Friday and it came out real dope. If I would have just sent all this ignorant type shit in a file and have had them listen to it, I may have not made TM103. However, because I was there, I was able to convince them to pay attention to the record I wanted them to pay attention too and it was exactly what he needed. Sometimes you have to be there with the artis to make him realize what you want him too."

Future Projects: "I can't say too much. I can say that I got on 50 Cent's first single. I have been working with Future and Ludacris on their albums. I have been working on Established In 1989 mixtape which is my production tape. All tracks are produced by me. It will have everyone that has ever fucked with me on there. That is dropping on December 27th and my people been waiting on it since summer."
Posted by DJ NEW ERA at 12/18/2011 08:17:00 AM